Power of Play: Finding New Friends and Perspectives in Destiny

Games always fuel and often reward connection. Read how playing Destiny 2 with his in-game clan helped one teen nurture his real-life friendships at a time of social distancing and abrupt change.

For many young people, video games like Bungie's Destiny 2 are more than just play. Games provide a place to connect, a place to explore, and a place to learn. At iThrive Games Foundation, we have seen firsthand how game play can support teens in thriving, whether it's in the classroom or amongst friends playing together online.

Earlier this year, we asked teens from a high school in Philadelphia to share a bit about their experiences with games. For extra credit in their sophomore English class, a few students shared their thoughts on questions such as, "How do games help you deal with life? What games are meaningful to you and how do they help you better understand yourself or the world? How do games help you question the way things are in the world?"

Below, one teen shares their insights on play and the video game, Destiny in their own words. To protect their privacy, their reflections will be shared with initials rather than full names. We hope these stories illuminate the power of game play as seen through the eyes of these young people.

Gaming has been a great tool in my life for learning lessons about people and life. They allow you to expand your perspective on a multitude of things while having fun. Gaming has brought many friendships to my life and I am happy about it. One game in particular I would like to talk about is Destiny.

To begin, Destiny is an open world game where you choose between three classes: Warlock, Hunter, and Titan. You wake up from death with the help of a ghost, a little exodroid that can restore your life force. He has been searching for you for thousands of years. You wake up earth but many years later where aliens have conquered the planet and humans have moved to a safe haven named the tower. This is where your journey begins.

Once you make it to the tower, they begin telling you all of the stuff you can do to power up your character and the lore behind what's going on. The main protectors of the tower are the vanguard that are made up of the three classes mentioned above—Zavala, Ikora, and Cayde-6. You can go through most of Destiny as a solo player but they allow you to be in a group up to six.

Destiny provides so much never-ending content you can play multiple hours a day and still have a plethora of stuff to do. This helped me a lot because I was able to talk to my cousin Jalen more often while playing, since I couldn't see him as often as I wanted to. We stayed up countless nights trying to get better than each other.

We ran into other people who wanted to do the same and just had so much fun. You can join a clan in this game where it allows you to become a group of friends so you can do encounters together. We joined one about a year ago and we have run into so many good people in the world. They are just regular people trying to have fun. We roast each other on who is the best in the clan or if you can hold your own weight. They just try to make you better at the game. It also made me a better person.

Destiny was a gateway for me to play other games and get to know people I have not met in person. Games, in my opinion, are crucial so you can see how people work and the lessons you will learn in life. I'm glad I was able to expand my perspective on the world while having fun in a never-ending game. 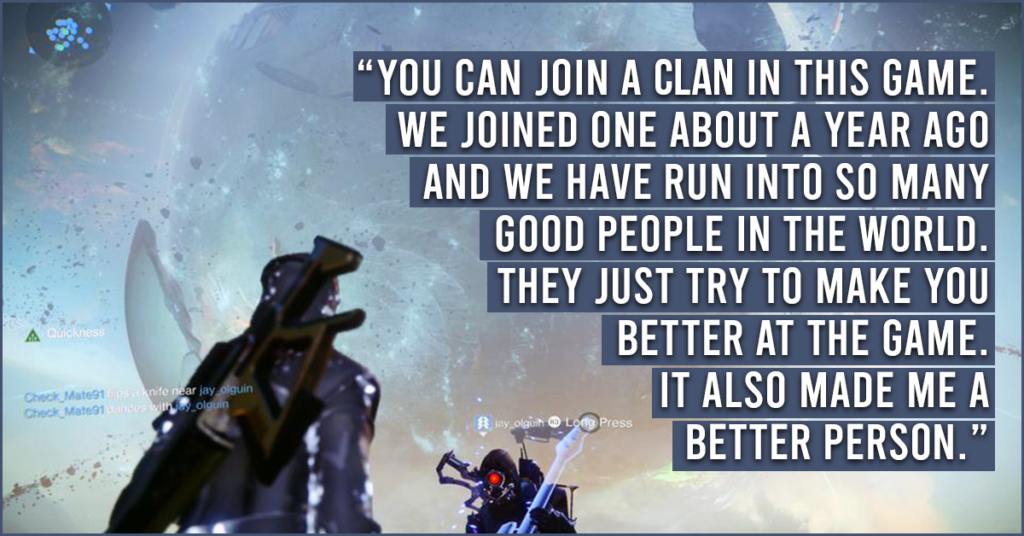 Check out our Game Guide for Destiny 2 for SEL-inspired themes in the game and discussion prompts crafted to invite depth to gameplay.

In Times of Stress, I Turn to Cooking Games. Here’s How They Help Me Cope.

Continuing our Power of Play series, Ashley, a teen from Philly, shares how cooking games have helped her cope with tough emotions and practice self-care.
Back to the top