Designing with Teens, For Teens

We partnered with Madison Park Technical Vocational High School to offer our Game Design Studio to their students. Here's what happened.

On a cool fall morning, iThrive's Boston-based team walked into the Design and Visual Arts classroom at Madison Park Technical Vocational High School in Roxbury, MA. After being stuck in traffic and frantically searching for parking, we carried crates of games and design supplies as we breathlessly climbed the long, spiral staircase to reach the third-floor studio space that housed the Design and Visual Arts Program. A few of the 18 juniors in the class looked up from the self-portraits they were drawing or charcoaling or painting to study us, while others did not acknowledge our arrival.

In Game Design Studio, we use games and game design to invite teens to give voice to their experiences and create games that reflect their point of view, ideas, feelings, and understandings of the world. The youth designers determine which games will be created. Their ideas form from many brainstorm and gameplay sessions while iThrive staff and Design and Visual Arts instructors roll up their sleeves to take on whatever work needs to be done to produce the games within a tight timeline.

We spent our first day with the youth designers at Madison Park playing and modding games together and getting to know each other. At the end of the day they were tired and so were we. We didn't know exactly what we would make together but we knew through relationship building, play, game design activities, and exploration these teens would give voice to their experiences.

By the middle of our second day, we were composing and performing a song together. The lyrics came courtesy of the teens' brainstorm about the challenges they face in daily life. The melody was devised by iThrive's Tabia Batts, beats were made by a tag-team of two youth designers, and iThrive's Jamal Hamilton provided the rap.

Through building this song together, we connected a creative process familiar to the teens with the unfamiliar process of creating a game. By using this natural entry point, we also laid the foundation for critical relationship building. Songwriting helped create a shared, trusting space where it was clear to the youth designers that we listened closely to their ideas and that their voices were valuable and critical to our game design process. And, singing together created shared vulnerability; each of us being vulnerable together reflected that we were present with them and that what they shared would be taken seriously and used to co-design games.

Tabia describes the moment she performed the song inspired by the teens' discussions on that first day:

"I would have to say that it was a very vulnerable moment for me but also very relatable.  Every issue that was on the table was something that I had dealt with myself as a teen and an adult. Working with teens takes a level of authenticity and transparency. I wanted them to understand how they can take something so simple like a word and add meaning to tell their story."

Each morning when we arrived, the youth designers were engrossed in either playing games or working on their game prototypes. Throughout the day, students were deeply engaged with the iThrive team, and many worked and played through lunch, stayed after school to design game elements, and demonstrated leadership, creativity, and persistence throughout. Geo Ortega, one of the course's instructors, commented, "I can tell they really like this because they're here late to finish their projects [for playtesting]."

One group of designers had an early inspiration to create a game where players would have to grapple with relevant social and personal decisions. If players successfully navigated the decisions they would win the game, staying in school and making it to high school graduation. If they didn't, graduation was off the table and other fates awaited.

The team designed early prototypes using google slides and began to shift toward a board game structure as we played more and more board games together. Eventually, we suggested to the team that the digital platform Twine may be a great fit for their core game mechanics. Intrigued by the possibility of creating a digital game, they took on the challenge.

Armed with a book on how to use the software, links to YouTube videos, and the iThrive team to jump in as needed, these designers took to Twine like experts and produced the game Decisions Decisions. At one point, they encountered a problem in the coding where their story was not linking up to another story element so the player could go to the next step of the game. The team became frustrated but they pushed their way through. They had to learn new coding techniques to allow that storyboard to work-and they did! They chose to stay late at school to work through this and other challenges, proudly showcasing their game to peers and teachers who enthusiastically played and debated which decisions to make and why. Tabia reflected, "I was able to see their struggle and frustration, as well as their pure excitement and joy when they solved their problems."

In just two weeks, the youth designers at Madison Park designed and built four games that touched on topics including lack of sleep, mental health, challenging decision making, and the difficulties of getting to school on time and safely. They ideated concepts; storyboarded; selected, devised, playtested, and revised core mechanics; and, with some help from their peers and teachers in fabrication, 3D printed, laser-cut, illustrated, and programmed all components of each game. Ortego shared with us, "This is a really strong group of students and they need projects like this that challenge them to create." And create they did! 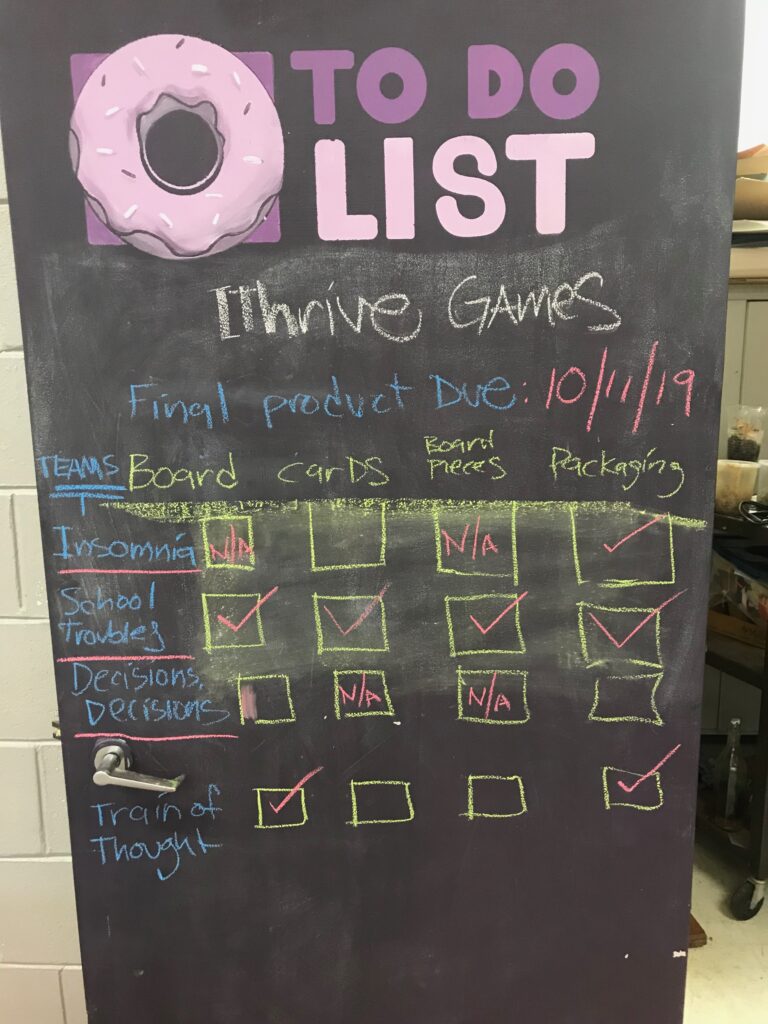 A palpable enthusiastic energy filled the room each day as the youth designers built and playtested their games across the two weeks. There was a growing buzz around the school; each day more and more teachers, administrators, and other students stopped by to check out what the youth designers were making. And by the day of the showcase, word had spread so much that there was a constant flow of visitors and playtesters for the full three hours.

Here's what they made:

Insomnia, a fast-paced card game inspired by teens' experiences of trying and often being unable to get enough sleep each night. Each card in the game represents hours of sleep gained or lost (e.g., +2 hours, -3 hours). Some cards help players earn additional sleep (i.e., a pillow card or blanket card). The dreaded insomnia card forces the player to lose 10 hours of sleep. The player with the most sleep hours at the end of the game wins. 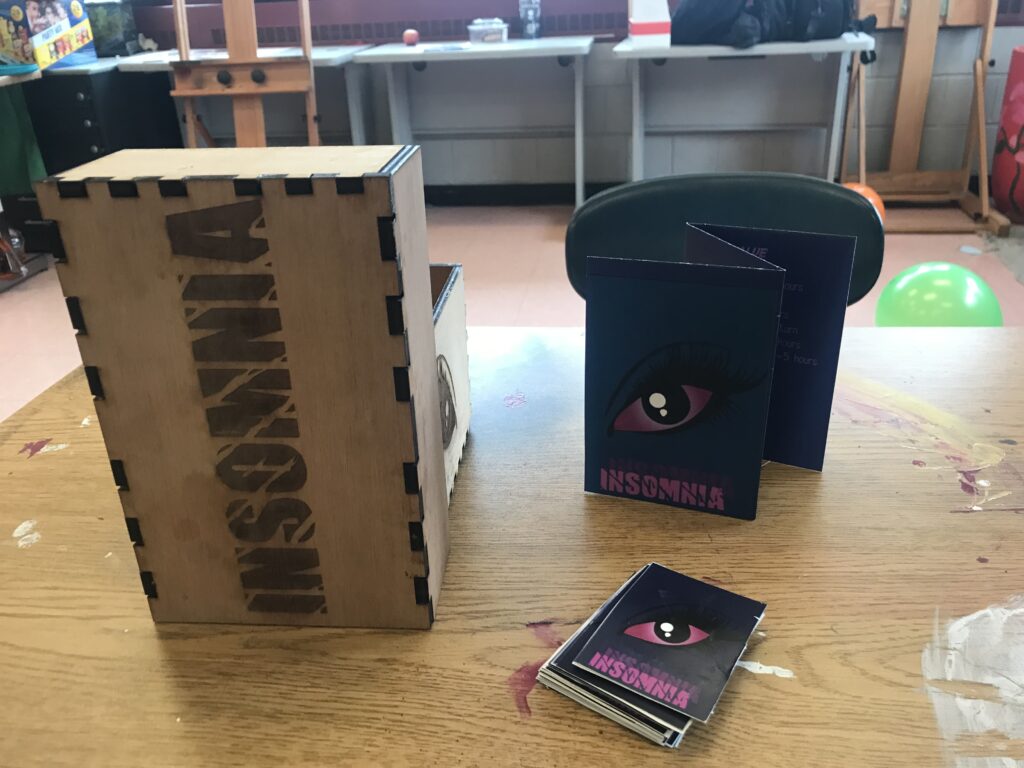 In the board game School Trouble, players try to overcome obstacles in their path on the way to school-late buses, traffic jams, delayed trains, and missed connections. This fast-paced, fun game reflects the real-life challenges the youth designers encounter as they try to arrive at school for the opening bell at 7:30 am. 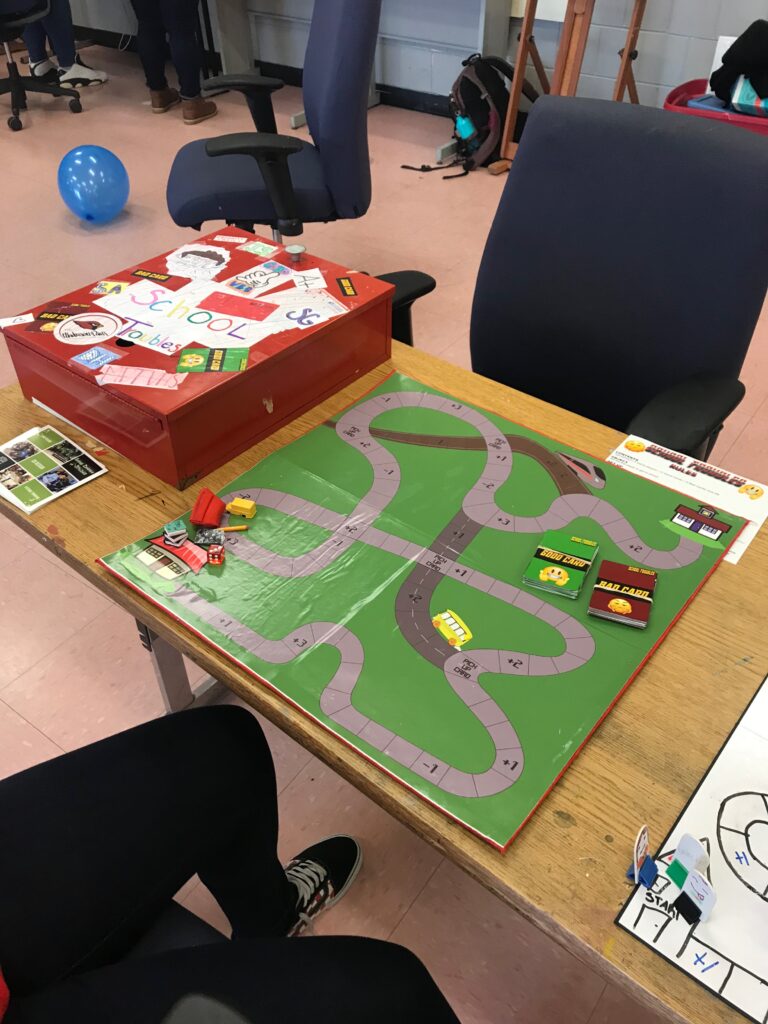 Decisions Decisions is a Twine game where players try to make it to high school graduation by making good decisions in the face of challenging real-life scenarios, like whether to sneak out to a party or do homework, whether to skip school when you're sick or stick it out, whether to lie to protect a friend, and more. The youth designers of this game wanted to create a fun and relevant game that would help their peers make better decisions by seeing the connections between the daily decisions they make and real-life outcomes.

The board game Train of Thought addresses mental health issues teens face. The youth designers compiled issues raised in the brainstorming sessions and explored which strategies would work best for coping with the different issues. "Talking to a friend" is a good strategic match for "feeling sad about a broken heart," while "meeting with a counselor" is a strategy match for "feeling depressed." During playtesting, one of the counselors from Madison Park had a chance to play the game and she said that she would love to have a game like this in her office to help teens talk openly and constructively about their mental health. 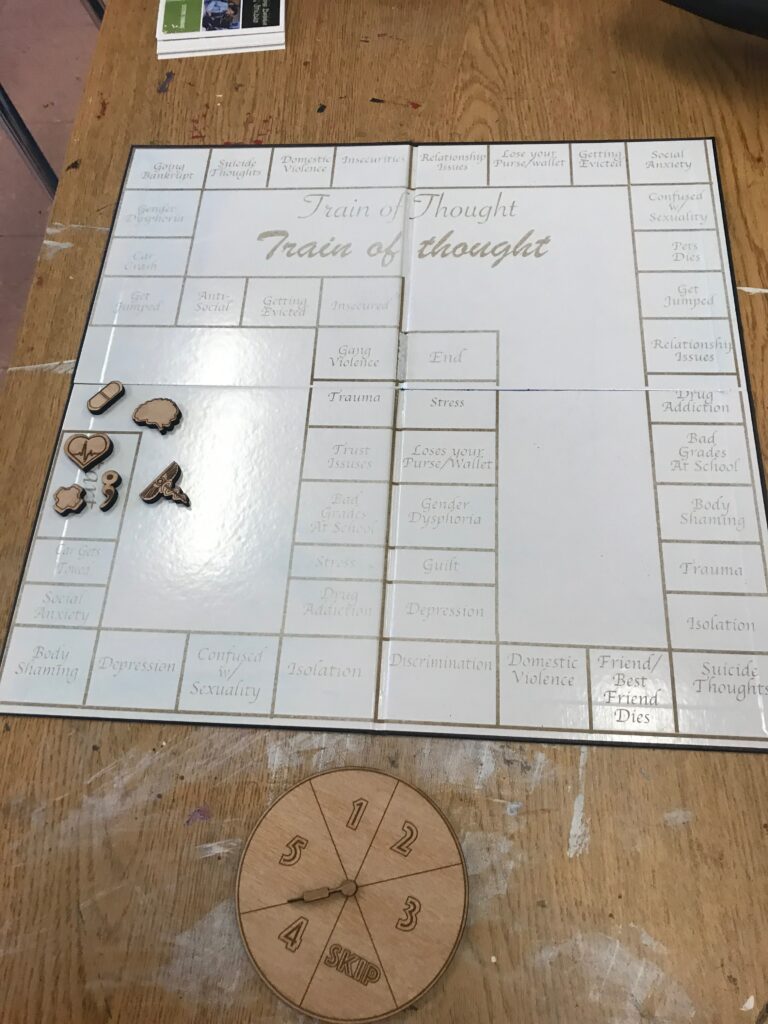 Authentically Engaging is the Magic

iThrive's Game Design Studio is designed to authentically engage teens in reflecting on their social and emotional challenges and opportunities while drawing on their lived experience to dream up and author their own games. Magic happens when adults and teens work together in this way to elevate and amplify what teens care about. In the process of co-designing games, we—teens and adults in partnership — build meaningful relationships with each other, lift each other up while sharing memorable experiences and encouraging personal growth, establish inside jokes, and sometimes, even, create an original song.

This work was supported through generous funding from the William T. Grant Foundation and the D.N. Batten Foundation.

The Social and Emotional Learning Opportunities in Video Games

Video games help us construct new understandings of ourselves and the world around us, creating play experiences that bolster wellness and support thriving.

Discovery, Expansion, and Design: Our Five Most Popular Blog Posts in 2022

In 2022, we played, learned, and co-created with young people and those who care about them new playful tools and experiences supportive of their thriving.
Back to the top